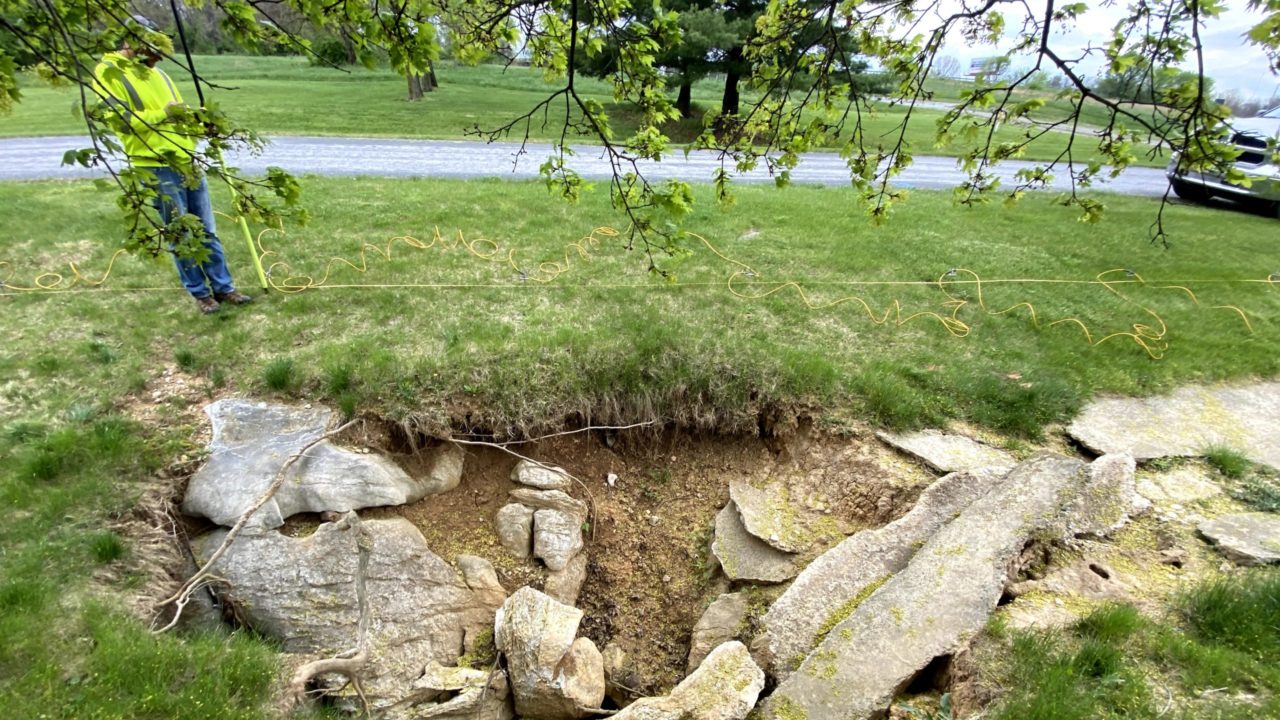 In March, Associate, Mia Painter presented “Site Characterization for Geotechnical Projects in Karst Using Geophysics” at the Association of Engineering and Environmental Geologists (AEG) Karst Hazards Forum. As an expert in karst, Mia shared a synopsis of her presentation below.

Karst refers to a landscape type – in my backyard it’s often the long stretching valleys with low rolling hills in between the higher Appalachian hills and mountains. Sounds nice, right? Well, there’s some complexities if you want to build there!

Two big things that make karst challenging and unique for civil and geotechnical projects are sinkholes and variable depth to rock. Sometimes bedrock can be very shallow, even right at the ground surface, and a couple feet away rock can be more than 40 feet deep! And sinkholes – sinkholes can open suddenly, often after a rain, and collapse roadways or buildings into them. Things like this can keep engineers and contractors on their toes.

What do we, as geologists, geophysicists, and engineers, do about this? We use an enhanced site characterization approach in karst which might include geophysical surveys, fracture-trace analysis, review of historic and geology maps, site reconnaissance, walk over and interview with local people, and then intrusive investigations like test borings or test pits. We have extensive experience characterizing subsurface conditions in karst areas, and then developing designs and recommendations so civil projects can be safely and economically constructed.

Geophysical surveys are how I spend most of my professional time, be it in karst or other environments. Geophysics in karst is particularly useful for two reasons – there is usually a strong contrast in material properties between soil and rock in karst which is ideal for a successful geophysical survey; and geophysics covers a wide area with one survey. This is particularly important in karst where variations over short distances are common and important features can be missed with a test boring.

In the presentation I showed three case studies in which we used some of the following four geophysical methods: electrical resistivity imaging (ERI), multi-channel analysis of surface waves (MASW), ground penetrating radar (GPR), and ground conductivity with an EM31. In one case study, using ERI, we found a 100 ft deep and 200 ft wide soft soil zone in the middle of the site that was not expected because shallow rock was outcropping on either side of it. In the second case study we mapped shallow rock over 120 acres with EM31 and followed up with ERI and GPR to correlate shallow and deep rock areas. In the third case study we used GPR, MASW, and ERI to map a zone of karst features across a roadway. In all the case studies, a drilling program was completed after the geophysics and the results correlated well.

Learn more about the methods, lessons, and AEG meeting information.

Karst impacts geotechnical engineering projects in several ways: an increased risk for ground and structure settlement, and sinkhole development, both during and after construction; and there are often complicated structure foundation design and installation requirements due to variable rock depth and conditions. These highly variable subsurface conditions can result in frequent issues during construction including differing condition claims, schedule delays, and material overruns.

Enhanced site characterization in karst may be more involved than a traditional geotechnical investigation at a non-karst site due to the variable nature of karst features across the site and should focus on characterizing these site conditions. The goal is to evaluate the risk from existing karst features and the risk of settlement and subsidence following the completion of the project.

Site characterization methods to consider include: fracture-trace analysis, review of available sinkhole maps and historic aerial photographs, site reconnaissance, geophysical methods, and intrusive investigation methods including test borings, test pits, and air-track probes. We present case histories of projects in karst where enhanced site characterization with geophysical methods were used to identify areas more prone to karst issues during and after development of the site.

Two big things that make karst challenging and unique for civil and geotechnical projects are sinkholes and variable depth to rock. Sometimes bedrock can be very shallow, even right at the ground surface, and a couple feet away rock can be more than 40 feet deep!