Recognizing Geologist on Geologist Day and Every Day

This year International Geologist Day was on April 4. We caught up with a few of our Geologists to find out what they enjoy most about their careers and what inspired them to enter the geology field. 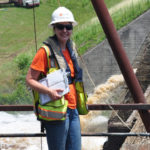 For Project Geologist, Sue Buchanan, becoming a geologist was a longtime dream for her. “I have wanted to be a geologist since the 7th grade when I learned that my love for collecting rocks and minerals was actually a science. I stayed on the path toward becoming a geologist after my first field trip in college to Yellowstone National Park. I was hooked!” In this photo, Sue was at Ledbetter Dam in Rockingham, North Carolina where she was responsible for logging soil and rock and completing in situ field tests of the rock for a subsurface investigation regarding a possible rehabilitation project of the dam. “What I enjoy most about geology is the mix of field work and office work that I get to be involved in”, says Sue, “I like seeing a job start, working with the project team to prepare for field work, then working in the field and seeing how the job gets completed by all parties involved. No project site is the same and that keeps me interested, I’m excited to learn something new whether it’s traditional field mapping or how to incorporate software for data analysis, and I’m able to contribute to the final product for the client.” 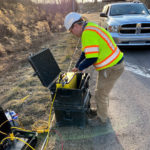 Senior Staff Geologist, Chris Mayer says in college he wanted to be challenged and geology provided that. “It’s complex and keeps you on your toes”, says Chris, “I enjoy how challenging and unique geology is. No project is the same.” In this photo Chris is conducting an electrical resistivity imaging survey on a road that runs through a karstic geology environment. As a geologist, Chris uses these geophysical methods to help delineate and map potential karst features for our team of engineers. 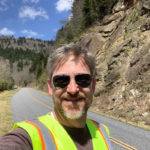 In this photo Principal Geologist and National Transportation Services Leader, Brian Banks is standing by one of the rock cut slopes along the Blue Ridge Parkway near Waynesville, North Carolina. At this job site, Brian and a team comprised of Schnabel Engineering, WSP and Appalachian Landslide Consultants, embarked on a project for the FHWA Eastern Federal Lands Highway Division to assess 250 unstable slopes along the Blue Ridge Parkway. The results of our services will allow Eastern Federal Lands and the National Park Services to prioritize the highest risk slopes for slope stabilization and hazard mitigation efforts. When asked how geoscience makes an impact on Brian’s career he stated, “The engineers and contractors who design and build transportation infrastructure rely heavily on the site characterization expertise that geoscientists bring. It is a relatively small role in terms of total dollars spent on infrastructure, but it has a huge impact in so many ways on public safety and protecting the public’s investment in its infrastructure. Through site characterization and evaluating geologic hazards, geoscientists provide a critical service to help ensure safe, cost-effective civil works that last for generations.” 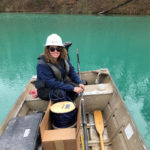 For Staff Geologist, Sydney Lawson, working in the geology field was something she always knew was right for her. “As nerdy as this sounds, I really love rocks”, she said, “They can all be so different and help tell a story about the history of an area. I always collected rocks as a kid and loved the outdoors, so geology was a natural fit for me.” In this photo, Sydney helped during the installation of four Drive Point Piezometers for a project in Alabama. Her team installed the piezometers as part of an ongoing abandonment project and conducted in situ vane shear tests to help with the engineering analyses for the site. 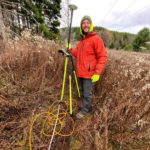 In this photo, Technician, Spencer Henry is at an earth filled dam in north-central Pennsylvania. He is using a Geo 7x to record the locations of site features that were pertinent to a geophysical investigation. Spencer was on this project to help assist in a geophysical investigation for Schnabel’s dams’ group. When asked about what he likes about working in the geology field, Spencer said “I love that it gives me the opportunity to work outside and learn about the parts of the Earth that a lot of people never get to see. Everyone is pretty used to seeing everything on the surface, but it’s so interesting to see what’s going on below the surface too! It’s nice knowing that the information we’re collecting is helping our team of engineers design and maintain incredible structures.” 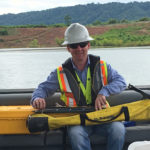 “I’ve always enjoyed the outdoors and was always fascinated by science”, says Senior Geologist Jonathan Flory, “Geology provides insight as to how the landscape around us was formed. To a geologist, a mountain or a river is much more than what you can see, it tells a story of how it was created.” In this photo, Jonathan was in the middle of the installation of instrumentation in two inactive quarry ponds along the Ohio River. Working with a heavy civil construction contractor, Schnabel Engineering developed construction procedures and installed instrumentation to reduce risk during the abandonment, while ensuring the placement of more than 1 million cubic yards of backfill material was completed on schedule

Geology provides insight as to how the landscape around us was formed. To a geologist, a mountain or a river is much more than what you can see, it tells a story of how it was created.